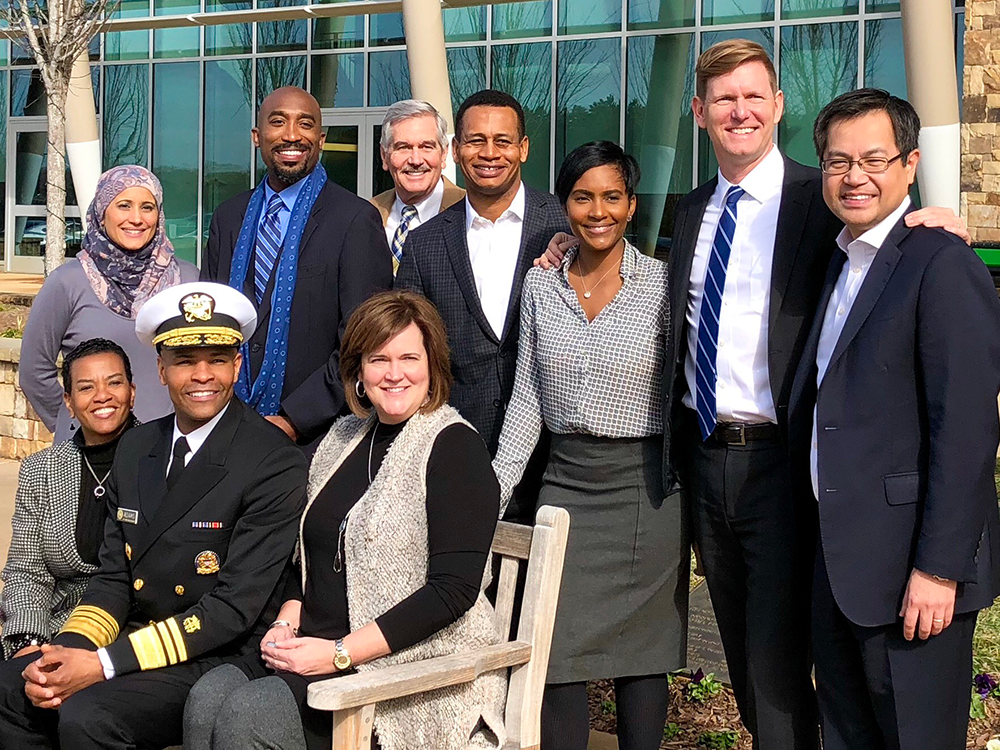 [This blog originally appeared on the Purpose Built Communities’ From Our Perspective blog.]

We recently had a chance to spend the morning with Dr. Jerome Adams, the 20th Surgeon General of the United States, to show him what real, live community development looks like on the ground at the Villages at East Lake in Atlanta, Georgia. Our interest grew out of the Build Healthy Places Network’s work at the intersection of community development and health to address the root causes of poverty.

An anesthesiologist by training, Dr. Adams has a long history in public health. He served as Indiana State Health Commissioner and taught public health at the University of Indiana. The focus of his MPH (Master’s in Public Health) from UC Berkeley was in chronic disease prevention, which may have inspired his interest in health at the neighborhood level and how transformative community development can lead to healthy communities.

On our tour of East Lake with Dr. Adams, we were joined by leaders from Purpose Built Communities, the East Lake Foundation, and Drew Charter School, along with representatives from the Build Healthy Places Network, the CDC (Centers for Disease Control and Prevention) and the Federal Reserve Bank of Atlanta. All of us recognized the remarkable achievements of Drew’s first senior class – all 82 students graduated and were accepted into college. We saw the results of the Science, Technology, Engineering, Arts, and Math (STEAM) curriculum, toured the East Lake YMCA and the early learning program. 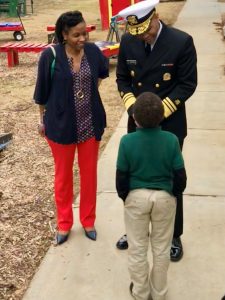 Dr. Adams talking with a student.

Dr. Adams spoke to Drew students about his upbringing, going from a farm in a poor rural part of Maryland to becoming a doctor to his appointment as Surgeon General of the United States. All too often, he remarked, poverty is seen as the fault of the individual, something deserved. Thus, solving poverty too often means getting people just above the poverty line, rather than helping them and their children prosper. He said he believes that health and prosperity are linked. Health creates more prosperous and productive people, which is good for the economy. Good health means lower healthcare costs, which are a drag on families, businesses and the entire community.

We agree. Research indicates community investments that create health also reduce crime and improve safety of economically disadvantaged neighborhoods and surrounding areas. It’s not enough, however, to fund local programs, no matter how successful they are. To be most effective, investments must take place “way, way upstream,” in the words of Dr. Ursula Bauer, director of the CDC’s National Center for Chronic Disease Prevention and Health Promotion. Innovative partnerships and funding models can address social determinants of health in a holistic approach. Partnerships and investments like those occurring in East Lake and other Purpose Built Communities represent part of the link between the economy and health and offer exciting possibilities for addressing long-term, intergenerational poverty. 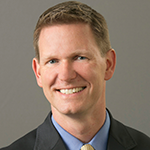 Douglas Jutte, MD, MPH is Executive Director of the Build Healthy Places Network, a national organization that catalyzes and supports collaboration across the sectors of community development and health with the goal of increasing investment in low-income neighborhoods, maximizing the health benefits of these investments, and improving outcomes measurement.

The Build Healthy Places Network grew out of the realization that many of the root causes of poverty and poor health are the same and that the community development and health sectors have worked for decades to address these challenges. However, these two sectors have often worked separately, even when serving the same places and people. The Build Healthy Places Network is designed to foster cross-sector collaboration to ensure that all people can live healthy and rewarding lives. 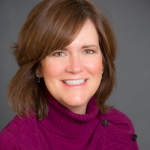 Carol R. Naughton, President, Purpose Built Communities, has been a leader in comprehensive community revitalization for more than 20 years and was a founding staff member of Purpose Built Communities. In her role as President, she is responsible for leading the consulting teams that support revitalizations in 16 cities, as well as the teams currently vetting opportunities in 35 additional cities, including several in metro Atlanta. She ensures that clients are focusing their time and resources on the highest impact activities in their respective neighborhoods and serves as the primary public spokesperson for Purpose Built Communities at conferences and events around the country. The work she has led has been recognized as uniquely successful by many, including Warren Buffett, Ben Bernanke, the White House Office of Neighborhood Revitalization, the Urban Land Institute, Mutual of America, Wells Fargo, Bank of America, the Education Trust, the Low Income Investment Fund, the San Francisco Federal Reserve Bank and the Secretaries of the U.S. Departments of Housing and Urban Development (HUD) and Education.